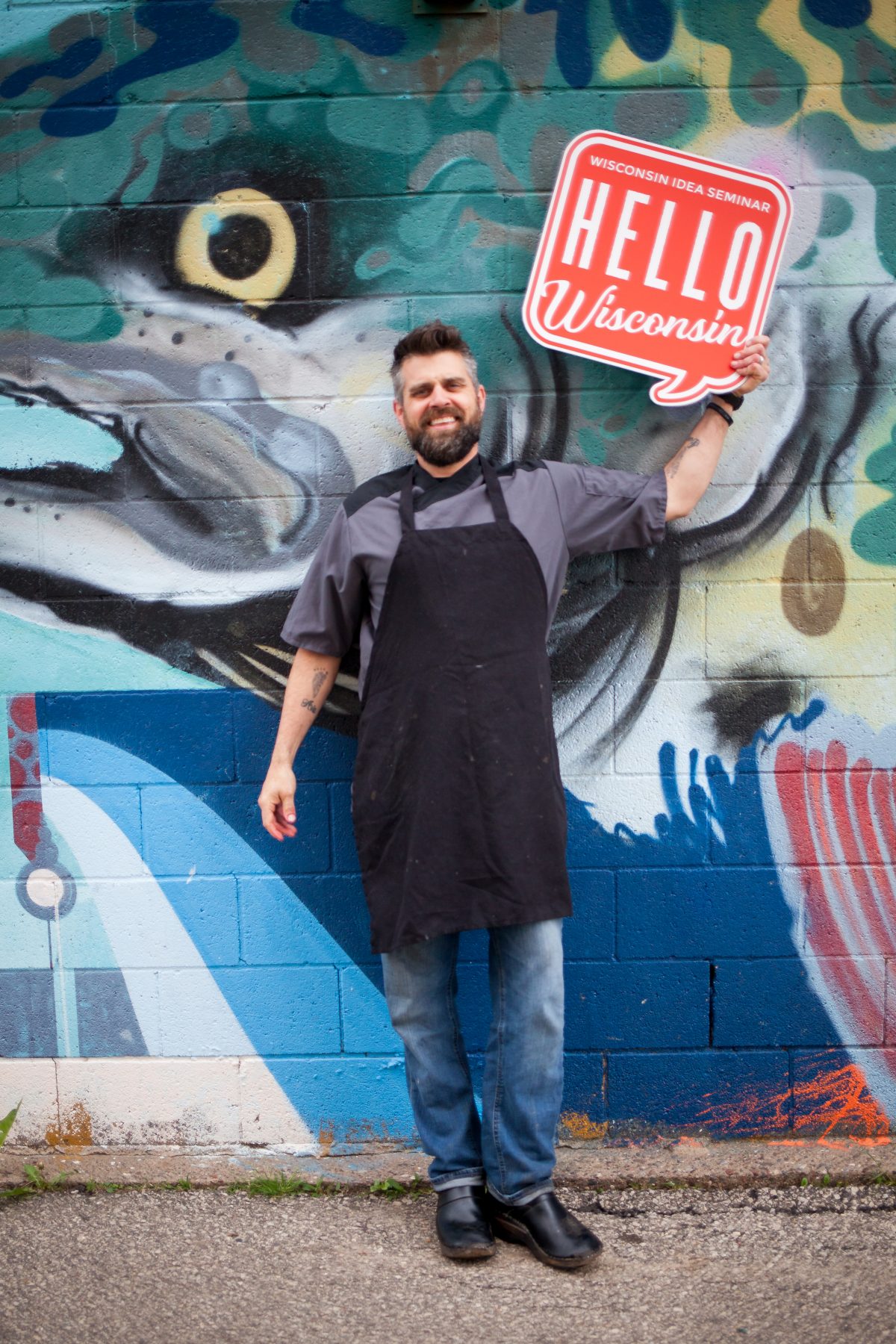 Luke Zahm, owner and chef of Driftless Cafe and television host of Wisconsin Foodie, welcomed 2019 Wisconsin Idea Seminar participants to his restaurant last May. A UW-Madison ‘03 grad and La Farge local, Luke was able to share perspective on food and how his identity as a chef is deeply rooted in and shaped by the contoured lands of the Driftless Area. In this interview, he discusses his experiences growing up in Vernon County, the importance of community agriculture, and the influence of the University of Wisconsin, among other things.

Luke Zahm, owner and chef of Driftless Cafe and television host of Wisconsin Foodie, welcomed 2019 Wisconsin Idea Seminar participants to his restaurant last May. A UW-Madison ‘03 grad and La Farge local, Luke was able to share perspective on food and how his identity as a chef is deeply rooted in and shaped by the contoured lands of the Driftless Area. In this interview, he discusses his experiences growing up in Vernon County, the importance of community supported agriculture, and the influence of the University of Wisconsin, among other things.

Thanks so much for hosting the 2019 Wisconsin Idea Seminar at the Driftless Cafe!  What do you hope that participants took from their eating experience?

I hope that participants saw Wisconsin in a new and different light – and through the lens of food! I hope they saw leaders in the agricultural movement. I hope they saw rural economic development framed in a different and refreshing way. I hope we dispelled some of the myths about this being “fly-over” country and created some bridges between different population and cultural sets in the State.

You grew up right in Vernon County, right? How have your experiences in the area helped shape your path to where you are now?

I did grow up in Vernon County! And I’ve really started to notice my background here carrying me in interesting ways as my path expands.

First, I grew up fairly poor. We gardened and hunted for a lot of our food. I think being connected to food was natural, as it was part of our daily life. We didn’t really have restaurants to choose from, so I grew up with working parents who still found time to cook. Getting a pizza from the local gas station was a special treat! This enthusiasm for food hasn’t left me and I consider myself to be extremely lucky to have the opportunity to eat so well!

Secondarily, the importance of remaining relatable has also never left me. Preparing food or television that is over my head isn’t my scene. I want to create an impression on folks that can be appreciated from any perspective. Growing up in a small community has a way of keeping you humble. I think that folks share in success and failure when it’s someone they know or can relate to – and I’d like to think that my background here has made me relatable to most. I’ve felt over my head. I’ve felt scared. I’ve felt proud. I’ve felt overwhelmed. I’ve felt marginalized.

Honestly, the farming community in Vernon County has given me so much hope. I watched my small community transform into a national conversation about organic farming. I’ve watched family farms reinvent themselves and stay solvent. I’ve watched families of multiple generations come together to pick each other up and carry each other when times are tough.

We heard that you actually have a behavioral science undergrad degree and wanted to be a lawyer. What made you change your mind?

In honesty, I liked the connection to working with my hands. My grandparents were dairy farmers and machinists. My father owned his own construction company. From a very early age I was taught the importance of hard work and the valor of being exhausted at the end of the day. As a kid, I was expected to have a job when I turned 15. Because I was a little rebellious, I declined the offer to work on my dad’s construction company and found the first restaurant gig I could nail down (I was a car-hop at the local root beer stand). I then did fast food, then a supper club.

My first love was music (I wanted to go to college to be a rock star) and I found myself in Chicago at Columbia College. I was most certainly out of my element. I had never been in a Whole Foods, I was homesick, I was lost and I was broke. Before I left for school, the former CEO of Organic Valley made sure that children of co-op members received stacks of free product coupons. I walked into the Whole Foods on North Avenue in Chicago and, for the first time in my life, saw my hometown printed on the back of a cheese label. I literally cried. I was so excited that I knew those people, knew many of those farmers, knew that La Farge, Wisconsin, meant something to someone else in the world. It was the first time that I considered food as part of my identity.

Honestly, it wasn’t until I was working at a restaurant in Madison while taking classes at UW-Madison that it dawned on me that this could be my career. As I was daydreaming, the chef literally screamed at me, “Luke! You’re supposed to be the smart one!!! Why in the f%*$ are you using that knife to cut the butter??? Use your brain!!!” At that moment, I realized all the education, logic, intuition and people skills would serve me on my path in the industry. Around the same time, I discovered that the famed chef Charlie Trotter was also a UW-Madison graduate with a Poli Sci degree. I figured, “if he can do it, why can’t I?”

I went to Burning Man with my college roommate and came back changed. And the rest, as they say, is history….

Congratulations on being selected as the next host of “Wisconsin Foodie” on Wisconsin Public Television! What are you most looking forward to in that new role?

Can you tell us more about the emphasis on integrating farmers’ stories into your business model?

The first day we officially owned the Driftess Cafe, I locked the doors after lunch service and sat the entire staff down. I explained that this cafe wouldn’t be about me, about my family, about any one thing. It was about us as a community, us as farmers, us as an idea.   The first pieces of art we hung in the Cafe were the chalkboards that listed our farmers names. I tried to update them once, but discovered that I would literally have to cover the walls with names and places. This was my driving inspiration. I wanted to celebrate the people who provided us with the best food in the world, by not screwing it up!

When I was a chef at Epic Systems, I had a young farming couple start a dialogue about offering their CSA (community supported agriculture) to the staff. Both farmers were working second jobs off the farm in order to make their business model work. They had little babies and they were looking for ways to be on the farm full time. I pitched the idea to Judy Faulkner and she gave me the green light. Within a week, they had sold over 80 shares at Epic. This was the first time as a chef that I realized the power of our buying decisions. We could affect positive change by being selective with our purchasing and focus.

The farmers are truly the reason for the restaurant. Their hard work, their passion, their connection to the land are what make for the best ingredients on the planet. We get the easy job of putting them together!

How does the Wisconsin Idea animate your work?

The Wisconsin Idea IS MY WORK!  Evangelizing how amazing this place is to the rest of the world is literally my business, so I think the spread of information and ideas is one of the most profound things I’ve taken from my UW education.

There is so much knowledge, power, innovation, and justice that comes from the University of Wisconsin System that shapes my life. However, see below for the way the Wisconsin Idea actually changed my life and celebrated my identity….

Looking at your own experiences as a UW-Madison alumnus who came from a rural area, do you have any advice for current or prospective students who may have similar backgrounds?

I could talk about this one for a lifetime…..

When I was a kid, from a small town, I would become frustrated when nobody knew where I lived. I would have to explain that I was from “somewhere between Chicago and Minneapolis,” or perhaps (if they knew Wisconsin), “somewhere between Madison and La Crosse.” It sucked. It made me feel like it didn’t matter what I did, I was in the darkest spot in the universe.

It was in 1991 (I was 12), when visiting my brother in Madison (UW Geology ’93) that I heard for the first time the opening chords to Nirvana’s “Smells Like Teen Spirit” on MTV. I was entranced. It was loud, brash, and raw. It literally changed my life!!! I purchased the tape the next day with my paper route money. It was about one month later, that I discovered a man from Viroqua had a connection to the music I suddenly adored. Butch Vig, a UW-Madison alumnus, produced Nirvana’s “Nevermind” in Madison, and it was suddenly like a different message was being blared at me. Namely, “if he can do it, you can too” was what I heard in the snarl of distorted guitars and strained lyrics. 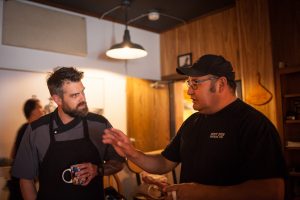 For perspective rural students, take the same message: YOU CAN DO IT, TOO! The UW will prepare you to make a big noise in the world! Find your place and re-imagine the identity of where you came from, how your education impacts the world around you, and put energy into that change! Together, we can create a new storyline for rural America that creates success for the people and places we love.