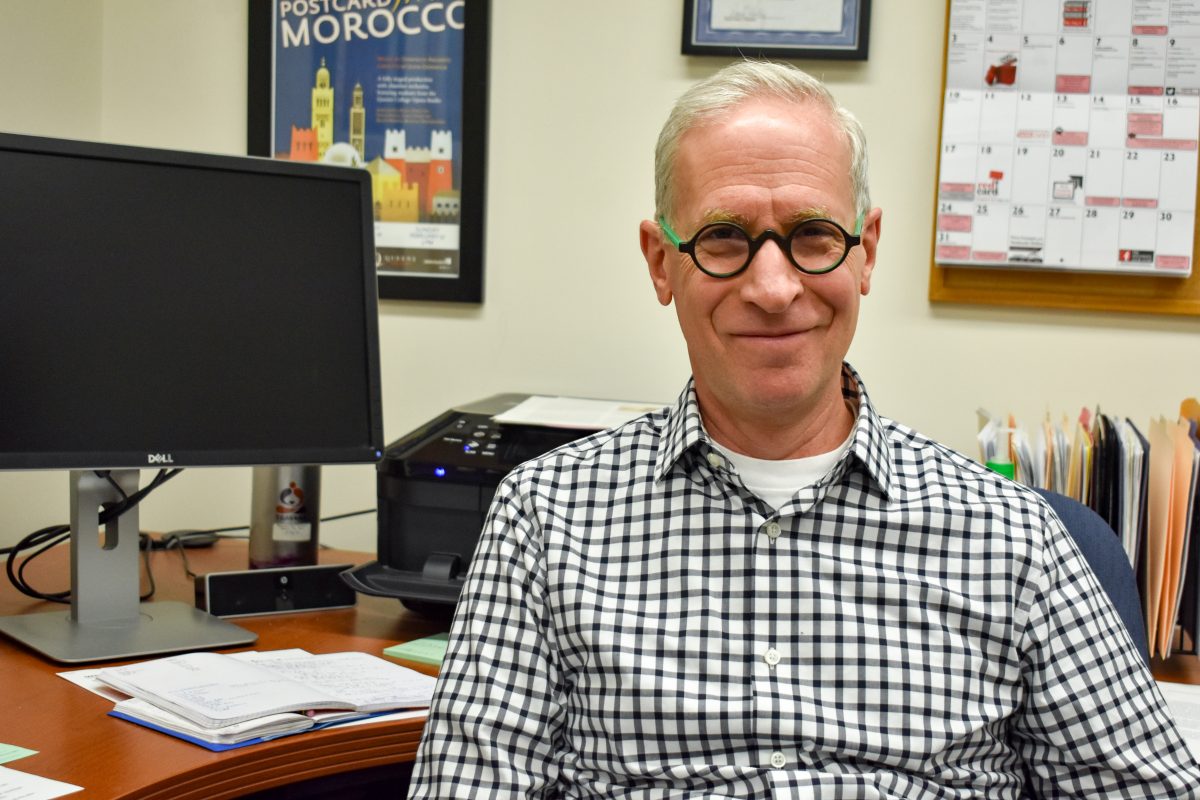 Only in the Humanities building can one wander down a hallway and be treated with delight to the sounds of voice and instruments as students practice for upcoming performances. Down one of these hallways you might find David Ronis, the Karen K. Bishop Director of University Opera and assistant professor here at UW-Madison. Originally from Syosset, New York, Professor Ronis has had his fair share of living abroad and visiting different parts of the country, but now calls Wisconsin home – enjoying performances at the Overture Center or Wisconsin Union Theater in his spare time. However, he enjoys teaching most, focusing on improving his students’ acting and moving techniques for opera performances that he directs. These performances are not only a great show, but they embody the Wisconsin Idea as well.

Fun Note: David Ronis is directing University’s Opera’s production of Puccini’s La Bohème. Performances are February 23-25 at the Wisconsin Union Theater. Get tickets and other info.

How does the Wisconsin Idea animate your work? The Wisconsin Idea is an inspiration and reminder why we reach out beyond our campus rehearsal rooms and theaters. Our work has the potential to really affect people. In opera we function both as interpretive and creative artists.  Interpretively, we take already existing material and put it up on stage in our way.  On the creative side, we craft and share our work with audiences in Madison and beyond – the essence of the Wisconsin Idea.  Recently I have started a creative/research project that involves sources housed at the Wisconsin Historical Society. I plan to make a piece that I can share outside of Madison.

What do you love about the University of Wisconsin-Madison? I just love being in an academic environment where the modus operandi is to explore, present, and discuss.  It fosters dialogue and allows you to hear perspectives from others that differ from your own. That’s what education is all about. Students learn new perspectives and so do teachers. I find it very stimulating.  I also truly love the variety of activities and offerings open to the university community and public at large. 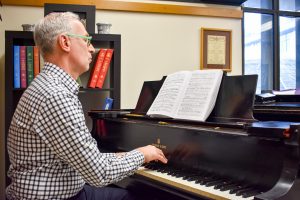 How does music play a role in your everyday life?  Whaddaya mean – music is what I do all day – it’s what I love, my passion, my life!  That’s my humorous answer. Actually, I wish it were all I did all day. Much of my time is taken up with administrative, non-musical activities that support my students’ performative and academic work. I can’t complain – all of that is very important.  My background is as a professional performer – I’m a classical singer and actor who became a teacher and director. But it’s funny – I don’t listen to music very much unless I’m preparing a new piece. In my car, I mostly listen to NPR. Not that I don’t ever listen to music, but I generally don’t go home and put it on for relaxation. For decompression, I tend to watch TV.

Is there a fact about opera that tends to amuse or surprise people? One of my missions is to get singers to break away from the tired old stereotypes of what opera singers used to do. In productions I direct, you won’t see much of the old style of operatic acting – basically standing on stage and singing – what we affectionately call “park ‘n bark.” Sometimes we will be rehearsing and if the students begin to do old-school posturing, my comment will be: “Sorry, I’m not buying it!” My goal is for them to develop characterizations and relationships that are full, believable, truthful and authentic. What I find amusing is when some audience members come to opera expecting, and even wanting, to see that kind of style (or lack thereof, IMO).  And I love to see their reactions when they express surprise and delight that good acting can actually be found on the operatic stage!

How has learning new languages and traveling abroad changed the way you think about the world? I love traveling and I’m kind of a language nerd. The major languages we use in opera— Italian, French, German—are the ones I’m best at just out of practice and necessity.  I’m pretty conversant in them all, but I daresay I’m fluent in any of them.  I also know a bit of Hebrew and I’m good in Spanish, from having studied it in high school.  In addition, I have some facility in Russian and I’ve sung in Czech. When I go anywhere, even different parts of the country, I am struck by cultural differences. Although globalization is a very strong force in the world, I find that different cultures really do retain their own distinctive characteristics and practices. I was in Italy last summer, where very few people, especially in small towns, have air conditioning.  In order to regulate the temperature, they close their shutters in the daytime and then open them up at night. That’s quite different than the standard of air conditioning in the U.S., but to Italians it’s normale.  While in Italy, I directed an Italian opera, Puccini’s Suor Angelica. The audience reaction to this piece was so different than it might be in the U.S. The Italians knew it well because it’s just a part of their culture. Italians, in a kind of stereotypical way, are truly very demonstrative and passionate and Suor Angelica delivers a rather strong emotional wallop. To hear the audience members talking about the performance was enlightening – they were just so much more emotional than, say, a New York audience or Wisconsin audience.

What is your favorite memory of a performance you attended? Ah, I have so many – about performances I’ve both attended and performed in.  One of the most moving performances I remember took place years ago at Tanglewood, the summer home of the Boston Symphony, where I attended a performance of a Mahler song cycle featuring the famous soprano, Jessye Norman.  When she finished the piece, the audience was transfixed – no one moved a muscle for what seemed like an eternity.  In actuality, it was probably a full minute.  The performance was profoundly affecting. That performance has stayed with me for years. Otherwise, there have been a number of memorable performances that I have been part of. In Nice, France, I was in a production of Carmen that was sort of set in the 1920s.  I say “sort of” because it was kind of a dramaturgical mess and the audience knew it… hah!  Similarly to my experience in Italy, I saw, first-hand how European audiences differ from American ones.  Here, the audience just didn’t like the production and booed really loudly during the curtain call.  I was on stage at that point, bowing with my colleagues and, I tell you, I loved the booing – I loved the rush of energy – really, it was incredible! I was doing a supporting part in the opera, I didn’t feel like I had much at stake, and I didn’t take the booing personally.  The audience’s disapproval was about the production and director. Here’s one more story: I was on the first national tour of Disney’s Beauty and the Beast for a while as an understudy for Lumière. We were in Chicago and the guy doing the role was ill.  So there I was, singing “Be Our Guest” in a big, three-thousand seat theater.  At the end of the number, the energy that came from the audience was incredible.  Talk about a rush!

Who or what inspires you? I’d say, my colleagues and my students. My colleagues, as you would expect, are real pros who are on top of their game.  But what inspires me is how much they love sharing their art. Our faculty have so much expertise, joy, and love that they spread around – again, it’s really the spirit of the Wisconsin Idea. And then I see how we inspire our students to proceed on that path to do exemplary work – it’s really quite gratifying.  I remember years ago when I first got started directing.  I was sitting in the house and just weeping as I watched my students – they had learned so much and their performance was so moving!  It was truly beautiful and inspiring. It’s definitely the reason why I teach. 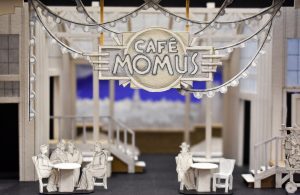 What are three pieces that have most affected you? At the age of sixteen anything written by Puccini would send me over the moon and I can say that that influenced me to pursue a life in music. I’m thrilled at the moment to be doing Puccini’s La Bohème at UW-Madison (performances February 23-25 at the Wisconsin Union Theater) – it’s really filling me up.  There are also certain pieces that have taught me a lot as a director.  For instance, there are two twentieth century operas I’ve done that were like puzzles – Postcard From Morocco by Dominick Argento and Conrad Susa’s Transformations, the text of which consists of poems by Anne Sexton – fairy tales transformed into darker psychological stories. Neither contains a narrative through-line nor an obvious message.  So there was a lot of figuring out to be done.  Both of those pieces helped me personally to grow as an artist and a teacher.

You participated in the 2017 Wisconsin Idea Seminar where you spent five days traveling around the state learning about the people and places of Wisconsin. What do you say to colleagues who are considering the Wisconsin Idea Seminar experience? I say, GO! It’s an incredible, rich, meaningful experience on so many levels. You meet and share so much with colleagues from other departments. And the presentations and conversations so often shed new light on your own work. I’m also not a Wisconsin native.  So I found that understanding the topography, the physical, educational, cultural, and emotional landscape of the state can inform our teaching so much. And it’s great to go out and meet people of the state. So many people in Wisconsin are so very connected to the UW. They are grateful for the University and the work we do. The Seminar actually taught me to be humble about all of this.

Can you share a memory from your Wisconsin Idea Seminar experience? One of the most memorable things for me during the Seminar happened on the first day when a colleague from the environmental science department gave a talk on the bus.  He spoke about the difficulty of discussing climate change in some parts of the state. His solution: not to talk about climate change.  Or at least not to talk about it directly. Instead, he described meeting someone and asking “how are the trout?” The ensuing conversation ostensibly about trout, in fact, is about climate change.  This professor was using a technique to address issues that are important to all of us in a way that is not confrontational, but rather compassionate and understanding of the background knowledge and perspective of the other person in the conversation.  We all need to do this. As professors it’s easy to get too used to thinking of ourselves and presenting ourselves as experts.  But the other half of the Wisconsin Idea is to learn and listen – to hear what the people in our state think – and engage with them in this caring, compassionate way.  That’s how we professors at the UW can really serve Wisconsin.

Professor Ronis earned his B.F.A. degree from Purchase College of the State University of New York and his M.A.L.S. (Master of Arts in Liberal Studies) in Opera Studies, an interdisciplinary research degree, from Empire State College/SUNY.