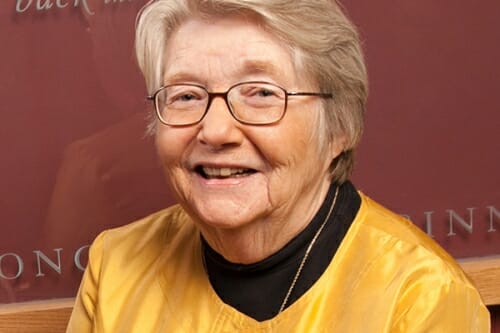 In certain campus circles Margaret “Peg” Geisler, 82, is best known and celebrated as the founding director of the Wisconsin Idea Seminar, the UW-Madison’s signature study tour for faculty and staff. Others now know Geisler and her life experiences with cancer as the inspiration that launched an international search for “extreme survivors” of metastatic breast cancer. Oncologist Mark Burkard at the UW Carbone Cancer Center is attempting to find other survivors like Geisler to research if there are differences or similarities between Geisler and other long-term survivors. Read more here.

As the inaugural director she launched the Wisconsin Idea Seminar in 1985, and set the tone and philosophical  approach of the program that is still relevant and meaningful over thirty years later. Since 1985 more than a thousand UW-Madison faculty and academic staff have explored Wisconsin through the program.